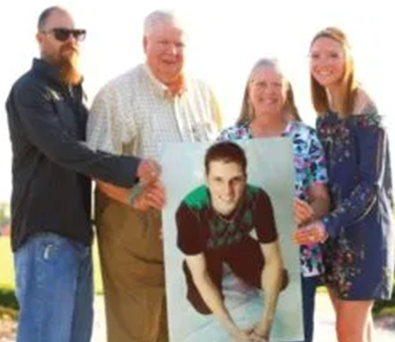 He crossed the line. Witnesses said he drifted over it. Our son – a loving son, brother and uncle had a car wreck on his way to work on April 6, 2007. His seatbelt was on, the airbag deployed, but his height allowed head trauma that caused brain death within twenty-four hours.

Ryan believed in helping people; believed in second chances. He said he wanted to be an organ donor. As he put it “What sense does it make not to donate?” Our family honored Ryan’s decision, and he’s helped or saved the lives of sixty-one people in twelve states plus Korea.

We wish all those he helped could have known him; been blessed by his easy-going personality; witnessed his giving spirit and joy in life. Our family misses Ryan every day. We miss his smile, but believe he is smiling now.

Back to Stories of Hope & Healing ↵