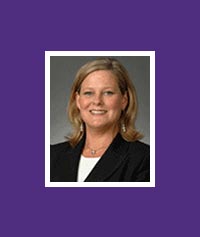 Anne Gulotta is Senior Vice President of Trading at Northern Trust Securities Inc. in Chicago, where she has worked since 1991. In her position, she is instrumental in trading institutional and retail fixed income with special expertise in mortgage and related asset-backed securities, as well as transition management liquidation. She’s also involved in the marketing of Northern Trust Securities products and has appeared on financial radio and TV programs to discuss market trading activity.

Ms. Gulotta is passionate about organ and tissue donation and takes personal time away from her career and family to serve as a volunteer speaker and advocate on the subject. Since 2002, when her husband, Jay, passed away and became an organ and tissue donor, she has spoken to thousands of people of all ages about the importance of organ donation and how it has changed her life.

An active volunteer for Gift of Hope since 2003, Ms. Gulotta has remained committed to sharing her story with the hope of creating even greater awareness. She has been featured in several publications, including the Chicago Sun-Times, the Mason County Democrat, the Daily Herald, Barrington Quintessential Magazine, the Barrington Courier and the Peoria Journal-Star. She also collaborated with WLS radio on a special presentation that highlighted her story as part of a larger feature on organ donation.

Ms. Gulotta’s other professional affiliations include serving as a board member for the American Foundation for Suicide Prevention and co-chair of its High School Outreach Committee. She also serves as a board member of Barrington, Ill.-based H.E.R.E., an organization committed to preventing teen suicide. She is a regular contributor on the topic of teen suicide prevention for Living 60010 and is active in the Military Appreciation and Assistance Resource Council of Northern Trust Company in Chicago.